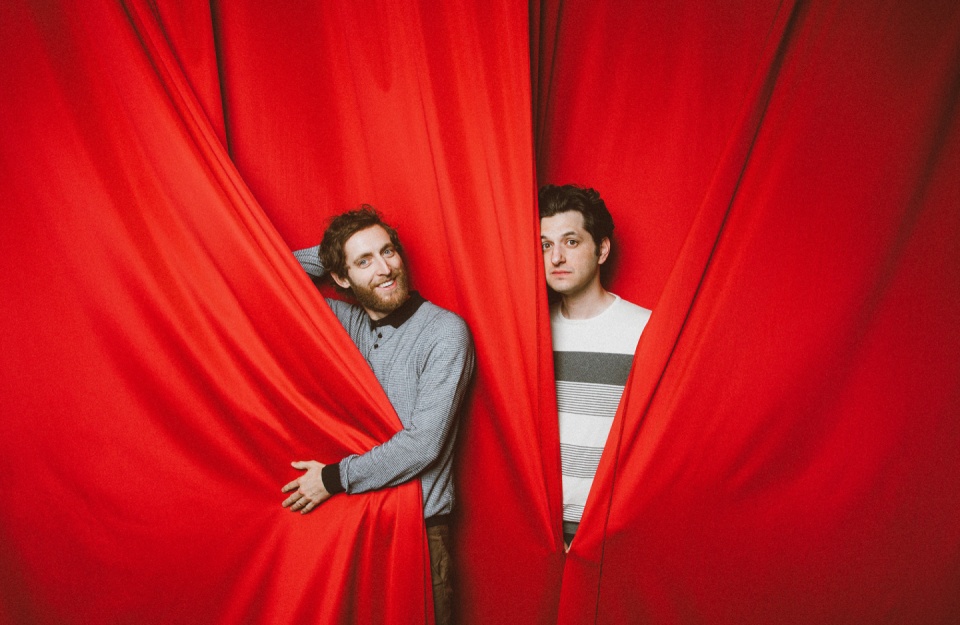 As we all know, describing improv out of context is hard to understand. For best results, you should watch the Middleditch & Schwartz comedy specials on Netflix before reading this article. There are also potential spoilers below.

When practicing improv skills, we usually have only our own scenes to talk about. It’s much harder to write for a larger audience because there aren’t many common sources to refer to. (Whose Line Is It Anyway? still comes up, but it’s been off the air for a long time and becoming harder to find every year.) Long-form improv is almost non-existent on film or TV, so the release of the Middleditch & Schwartz comedy specials on Netflix gives us an exciting opportunity.

This isn’t a review of the specials. Whether you find the improv funny (or even good) is subjective. I haven’t seen Thomas Middleditch and Ben Schwartz in person and have no idea how these sets stack up to their usual act. What I’d like to do here is point out what we can learn from these shows. I’ll assume you’ve watched them and will refer only to specific beats and examples.

(For a review, along with a great history of improv and its place in the arts world, check out this article on Vulture.)

When introducing their set, Middleditch & Schwartz use a very simple prompt to get a starting suggestion. They ask for something that someone is looking forward to, or dreading. It’s a question that draws out situations with potential emotional depth.

Ask-fors don’t have to be “out there”. We sometimes get bored with the same questions, and try asking for left-field ideas. Often, the audience isn’t in the headspace to answer the way we want them to. Either they can’t think of anything at all, or their suggestions tend to be weird and tough to play. It’s good to remember that simple questions can generate sustainable ideas.

In their interviews with audience members, Middleditch & Schwartz ask mostly about characters in the person’s life. This is typical for long-form improv. But they miss opportunities to ask about environments and settings, such as places where the characters hang out. Occasionally they’ll stumble upon something (like the Wal-mart parking lot), but it would be good to ask deliberately.

For all three specials, the opening beats are static, without much sense of place. This is okay, but it can help both the crowd and players to know where you are. You don’t have to dive into environment or object work, but pay some attention to where the scene is taking place.

For example, at the start of “Dream Job”, where is the computer job interview taking place? We don’t find out until after it’s over. Knowing that he’s in a public office could have let Schwartz play more embarrassment when acting out the gazelle bit.

Based on these episodes, Middleditch has the edge in physical instincts. He’s more likely to discover objects or explore activities.

Object work gives you ways to play with physicality. There are great examples in “Parking Lot Wedding”, where Middleditch pulls different musical instruments out of a box, or discovers he’s tying a bow tie AND a tie. These visual moments get honest laughs, and you can play with them throughout the set.

For example, with the bow-tie-and-tie, you could explore the double nature of everything that character does. Maybe he also wears a belt and suspenders. Maybe he carries two of everything, in a briefcase and a backpack.

The Skirball Auditorium (where these specials were filmed) is a huge stage for two people on a blank set. “Law School Magic” has nice examples of using the entire space, including the audience. See how Middleditch as the Professor looks for an exit from the classroom. See how Schwartz works his way through the crowd as the alien.

Notice how carefully Schwartz works his way through the audience seats. He’s focused on the scene, but also aware of what’s around him, and careful where he steps. He asks the audience members for consent to sit on them. It comes off as a joke, but it’s actually very important in taking care of the audience. When they feel safe, they enjoy the show more.

Like many long-form duos, Middleditch & Schwartz create many characters. They move between them, switching up who plays who, sometimes in mid-conversation.

A big advantage of this style is that it allows an improviser to quickly advance their own idea. In “Law School Magic”, Middleditch as the shy student asks about digital contracts. Then he immediately switches to the Professor for a strong, disturbed reaction. While Middleditch & Schwartz balance things well, be careful with this method. It’s easy to steamroll the scene with your ideas.

The challenge, for both audience and players, is keeping all the characters straight. Physicality and object work help with this. You can position characters on the stage so we recognize them by location. You can also add objects or behaviours to identify characters. In “Law School Magic”, notice the specific placement of each student’s chair, and other identifiers like Emily’s hair tie, or Stanley’s tote bag. This seems simple, but it’s very powerful.

Short Paul from “Parking Lot Wedding” is a great example of creating perspective. See Middleditch’s swinging legs, and everyone looming over him by standing on chairs.

Don’t be afraid to throw a curve ball idea into a scene. The potential for new and interesting directions is huge. The ghost in “Parking Lot Wedding” appears out of nowhere, and is confusing at first. He then becomes the priest who is instrumental in wrapping up the plot.

Mysteries are also a great way to sustain a long-form narrative. The secret door in “Law School Magic” leads to a significant but productive detour in the story. But don’t leave a mystery hanging too long — the hedging becomes frustrating. Middleditch backs off on opening the door, not wanting to deal with Schwartz’s weird character on the other side. It’s played for a laugh, but draws out the beat too long.

Middleditch & Schwartz regularly break character, commenting on the scene and each other. There’s also a lot of “meta-improv”, where the conversation seems to be about the scene, but is clearly the players horsing around.

Audiences like to see performers having fun, but this walks a fine line. You need a strong audience rapport to keep them from getting impatient. Fans of their sitcom work might love to see these actors goof around for an hour. You may not have the same pre-built goodwill to rely on, so it may depend on how much you can charm the crowd.

The biggest problem is that the scene stops while you’re doing this. “Dream Job” is the least satisfying of the three specials because it never gets to a resolution. It might be fun to watch the two taunt each other over rock-paper-scissors, but they lose too many story minutes, and time eventually runs out.

Finally, a word about forgetting character names, which Middleditch & Schwartz make many jokes about. It’s a classic improv problem, and improvisers comment on it way too much. We either have to start doing the work to improve our memory, or decide it’s worth holding up scenes to do the same cliché gag.

For the record, I enjoyed these specials. Congratulations to Middleditch & Schwartz and Netflix for taking a chance on recorded long-form improv. Let’s hope this creates more interest in the future.

What do you think of Middleditch & Schwartz? What other improv tips can we learn from watching the shows? Please leave a comment below and share your ideas with the Improv Illusionist community.